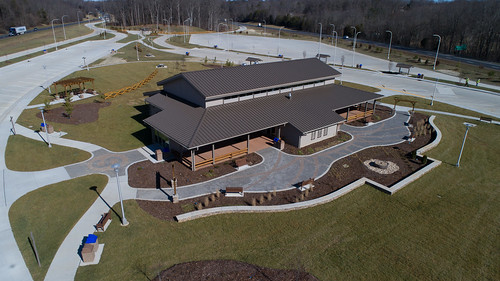 CHARLOTTE – Motorists driving along Interstate 77 will soon be able to stop and stretch their legs at a new rest area just south of the Tomlin Mill Road interchange (Exit 59) north of Statesville. N.C. Department of Transportation crews will open its doors on Thursday morning, Feb. 1.

Construction of the 5,000-square foot, $15-million facility started in the spring of 2015. This rest area is the first in the state to be built in the median, allowing motorists to exit I-77 from the left lane in either direction. Building the facility in the median did not require additional right of way, saving the state approximately $1 million.

The new facility features six restrooms, including two for families, a vending/seating area, 55 parking spaces for trucks, and additional parking for smaller vehicles.

With the opening of this facility, four other rest areas along I-77 will close – two at the Iredell/Yadkin county line, and two north of Mooresville. Crews will be out on Feb. 1 to cover any remaining signs to these facilities, place barricades at the entrances from I-77, and place portable message signs advertising the closures about a mile before each rest area. Overhead message signs will also be used on I-77 and I-40 beginning Thursday to encourage motorists to visit the new rest area.